Film Graduate to First Paid Gig as a Cinematographer 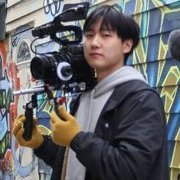 By Andrew Ko,
January 31, 2020 in Students and New Filmmakers