Any Anamorphic solutions for NPR/ACL? 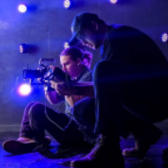